For excellence in the design of a product for learning science or mathematics, the International Society for Design and Development in Education has awarded the first ISDDE Prizes of US$10 000 each  to Malcolm Swan of the Shell Centre, University of Nottingham, for The Language of Functions and Graphs, and to Glenda Lappan and Elizabeth Phillips, jointly,  of Michigan State University for Connected Mathematics.

The Language of Functions and Graphs:

The seminal work of Malcolm Swan in The Language of Functions and Graphs opened eyes to the wonderful ways students can learn how the line graphs of mathematical functions model situations from the real world or from the imagination.  The correspondences (and non-correspondences!) between the graph and the structure of the situation are brought delightfully to the student’s attention through well crafted problems and questions. The approach of direct interpretation from graph to engaging phenomenon is really developed for the first time in problems like “Which Sport?”. Published in 1985, The Language of Functions and Graphs has influenced the design of instructional materials and assessments world-wide.

The Language of Functions and Graphs, colloquially known as “The Red Box”, is also notable for the systematic development process that included multiple trials and revision of the materials by the Shell Centre team, ultimately with representative samples of teachers and students. Swan’s empirically refined material proved robust across varied circumstances of use. It was also an early example of the well-aligned integration in a single module of the following elements: assessment tasks with rubrics for analyzing and grading performance; exemplified student performances; teaching materials for the new content; and a professional development package, with “do-it-yourself” robustness.

Glenda Lappan and Elizabeth Phillips led a team at Michigan State in the development of Connected Mathematics, a three-year mathematics curriculum for US middle school students, aged 11 to 14.

Lappan and Phillips focused Connected Mathematics on the structural coherence of the students’ learning progression. The key mathematical ideas around which the curriculum is built are identified at each level. The underlying concepts, skills, and procedures supporting the development of a mathematical idea are identified and included in an appropriate development sequence.

Classroom instruction focuses on the investigation of mathematical ideas embedded in problem situations. Mathematical tasks for students in class and in homework are the primary vehicle for student engagement with the concepts to be learned, and with mathematical reasoning using diverse representations. This careful design has been realized with considerable flair and imagination in many of the units. Original and effective use of text structures clarifies the important distinction between everyday and technical language that, left implicit, so often confuses students. 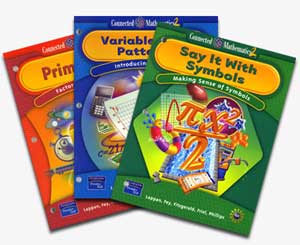 Lappan and Phillips employed a development process that was the epitome of good engineering, with substantial feedback (including, for example, video of the entire lesson sequence) from three rounds of field trials. The consultation with teachers and others was thorough. As a result of all this, the tradeoffs inevitable in any design were judged shrewdly, so that the resultant materials have had systemic impact on US middle school mathematics.

Two modules, Variables and Patterns and Say It With Symbols exemplify the excellence of the design work of Lappan and Phillips. Variables and Patterns introduces algebra by students exploring a variety of everyday situations in which changes occur.  Bicycle and car trips, costs of amusement park rides or car washes, box office receipts and races, are explored using various mathematical representations. Say It With Symbols tackles the development of robust fluency in symbolic manipulation (always a high priority) by focusing on “making sense of symbols” at every stage.  Work on interpreting symbolic expressions leads on to creating equivalent expressions and thus to sense-making solution of linear and quadratic equations, and to modeling.

Malcolm Swan is an Associate Professor & Reader in Mathematics Education in the
School of Education at the University of Nottingham. Malcolm conducts design research into the theory, development and evaluation of collaborative teaching situations in mathematics education.

Glenda Lappan is a University Distinguished Professor in the Division of Science and Mathematics Education. Her research and development interests are in students’ learning of mathematics, mathematics teachers’ professional growth, and change at the middle and secondary levels. Glenda is Co-director for the Center for the Study of Mathematics Curriculum and served as President of the National Council of Teachers of Mathematics.

Elizabeth “Betty” Phillips is a senior specialist in the Division of Science and Mathematics Education. Betty is interested in curriculum and professional development projects at the middle school and high school levels, as well as a projects related to the teaching and learning of algebra across the grades.