The 2015 ISDDE Prize
for Lifetime Achievement in Educational Design

The International Society for Design and Development in Education (ISDDE) has awarded the prestigious 2015 ISDDE Prize for Lifetime Achievement in Educational Design worth $10,000 to Solomon Garfunkel, Director of the Consortium for Mathematics and Its Applications (COMAP) in Bedford, Massachusetts. 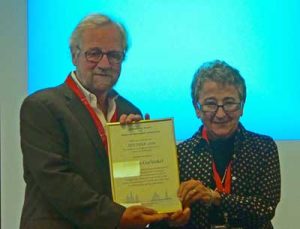 “This award recognizes the excellence of the design and development work in mathematics education that Sol Garfunkel and his team have produced over many decades,” said Professor Susan McKenney, Chair of ISDDE.

“Through a series of ground-breaking initiatives Sol and his team have succeeded in moving the teaching and learning of mathematics in high schools and undergraduate programs forward in important ways” she added.

The unifying theme in Garfunkel’s work has been the teaching of mathematics through mathematical modeling of real world situations – the message has always been that math is important, useful and interesting and the COMAP designed resources reflect that philosophy.

Since its inception in 1980, COMAP has developed a library of mathematical applications and championed the development and use of modeling to show students the applicability of mathematics in solving the world’s problems. COMAP supports the teaching of mathematics by:

Some key examples of COMAP’s output are outlined in Appendix 1; for more details about COMAP and its work visit http://www.comap.com.

Community: From the beginning, Sol’s vision has been of COMAP as a community, which needs support. The UMAP Journal, beginning in the early 80’s, was unique: a peer reviewed academic journal that contained student material (the UMAP modules) designed for in-class use, along with articles on the teaching and learning of modeling and applications. Consortium, though primarily a public information newsletter, is rich in content, with articles addressing careers, contemporary applications, historical notes, and a pull–out section which is essentially a lesson plan. In addition to the content, a great deal of effort was spent on the ‘look’ of the journals with a significant art program. The samples website illustrates all of these with:

It is also worth noting that the COMAP modeling competitions at undergraduate and high school levels have extended the reach of the COMAP philosophy worldwide. Last year almost 10,000 undergraduate teams, many from China, competed, advancing modeling work in the U.S. and abroad.

Television series: The telecourse For All Practical Purposes consisted of 26 half-hour episodes, hosted by Sol Garfunkel who led their design. It aired on PBS and won several national and international awards. The associated text was widely used for Mathematics for Liberal Arts courses, changing that important market. It was followed by two additional telecourses – Against All Odds: Inside Statistics and In Simplest Terms, which Sol also hosted.

Memorable individual classroom units: There are many units that, individually, fulfill the prize criteria of design excellence, enhanced by surprise and delight. Voting systems and the five candidates from the Replacement Party (Impossibility Theorems), the scheduling problem for the nightly news, and the non-zero sum games of chicken – these are outstanding examples.

COMAP has been dependent on project funding from funders who recognize the value of the work in advancing mathematics education. Over the past 35 years there have been too many projects and products to describe here.

Here are brief outlines of some of the most important, and prize-worthy: