The 2014 ISDDE Prize
for Excellence in Educational Design 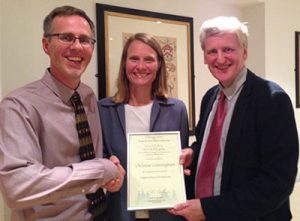 The 2014 Prize of $10,000 was for “excellence in design for education in science or mathematics”. On October 1st, at the 2014 ISDDE conference in Cambridge, England, the prize was awarded to Dr. Christine Cunningham for Engineering is Elementary.

Engineering is Elementary® (EiE®) has moved the field of educational design forward by providing proof of concept that even young children in ordinary classrooms can learn to love engineering. The EiE project, developed by a team at Museum of Science, Boston’s National Center for Technological Literacy®, led by Dr. Cunningham,, has reached over 6 million children and over 68,000 teachers across the United States.

They met the first goal by designing 20 curriculum modules that are short and flexible, and that integrate engineering concepts and practices with the science topics elementary teachers are already expected to teach. They linked in with the literacy curriculum by developing engaging illustrated storybooks to introduce each unit. They made the curriculum easy to implement by creating supporting materials consisting of lesson plans and a library of short videos so that teachers could see what the lessons would look like in practice. They engaged under-represented students by setting each engineering design challenge in an authentic setting, drawing on children’s real world experiences, such as designing a recipe for playdough, a system for transporting toys, or a knee brace.

There is also compelling evidence that the EiE materials have greatly benefitted young children. There is research evidence that students have changed their perceptions of what “engineering means”, the course has increased interest in engineering careers as well as promoting deeper understanding of engineering principles. Further, the research evidence that shows how the program is particularly engaging to under-performing and under-served students. For example, after learning with EiE, both teachers and students start to re-define what it means to be smart or clever, moving from conventional designations: being individually “gifted,” good at school work, quick; to less traditional notions: a smart engineer contributes good ideas, makes improvements in designs, is creative, and works collaboratively.

The materials were developed using a wide range of research findings on student learning, followed by many rounds of revision from extensive piloting, field trials, and expert review. The supports for teachers are quite extensive. EiE serves as a model for what engineering looks like in early learners, and this model is now being used around the world.

About the Museum of Science, Boston

The Museum of Science, Boston is the nation’s only science museum with a comprehensive strategy and infrastructure to foster technological literacy in science museums and schools across the United States. NCTL curricula have reached an estimated 6.1 million students and 73,700 teachers. One of the world’s largest science centers and Boston’s most attended cultural institution, the Museum of Science introduces about 1.5 million visitors a year to science, technology, engineering, and math (STEM) via dynamic programs and hundreds of interactive exhibits. Founded in 1830, the Museum was first to embrace all the sciences under one roof. Highlights include the Hall of Human Life, Thomson Theater of Electricity, Charles Hayden Planetarium, Mugar Omni Theater, Gordon Current Science & Technology Center, 4-D Theater, and Butterfly Garden. The Museum also leads a 10-year, $41 million National Science Foundation-funded Nanoscale Informal Science Education Network of science museums. Visit: http://www.mos.org.