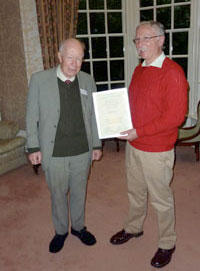 The award recognizes excellence in design of educational products and materials in science or mathematics. The 2009 award, “for a substantial body of work over a period of years” has been awarded to Paul Black of Kings College London.

Professor Black (pictured, left) has made major innovative contributions of four different kinds. He led the revolution in UK science education. He pioneered the development of a design-focused approach to Design and Technology, a field that had been largely craft-based. As chair of the Task Group on Assessment and Testing (TGAT), he led the design of the assessment system for the UK National Curriculum. He launched the current movement to recognize and exploit the potential of formative assessment in improving student learning.

His work recognizes the importance of all levels of design from the student and teacher in the individual lesson to the tactical and strategic aspects that are essential to the large-scale impact his work has achieved. His designs are based on careful research, much of which he himself has carried out, elaborated through systematic development. While he works with teams of able collaborators, his design leadership is widely recognized. The materials produce ‘surprise and delight’ in various ways, while weaving topics together to make a coherent connected course.

Nuffield Advanced Physics The physics materials he designed with Jon Ogborn have had major influence in the UK and beyond, both in their use by a substantial proportion of schools and in their influence on subsequent authors. The emphasis on the processes of scientific reasoning was as innovative as the introduction of 20th century topics including quantum mechanics, electronics and relativity. He has written: “A key feature for both of us then was the intellectual excitement of putting some of the key ideas of 20th century physics into the A-level*, a field in which the study had hitherto stopped at the 19th century. This involved pedagogic transformation, i.e. finding ways to present advanced and complex ideas in ways that would be both authentic and intelligible.“

The Higher Education Learning Project in Physics reflects the university teaching background from which he came into full-time science education. It built on his earlier work on the teaching of Physics at the University of Birmingham introducing, for example, six-week “group study” research projects in the final year.

Nuffield Primary Science played an important role in taking the study of science in the elementary school beyond the traditional “nature study”.

Nuffield Design and Technology Project enabled teachers to move beyond the craft tradition (woodwork, metalwork, cooking…) to include the processes of design.

Formative assessment Through an extensive and careful research review, he launched the current recognition of the potential of formative classroom assessment in promoting student learning. He then went on to develop tools for teachers to use in realizing some of its potential in the classroom. This work continues.

All these projects combined principled innovation in design with large-scale impact. The design concepts are as profound as the resultant materials are effective – and delightful.

“The construction of a course is itself a piece of engineering, a job to be done despite inadequate knowledge of how some of the basic components in the learning process work. We have conceived the task as one of weaving topics together to make a connected story which makes sense and arouses interest in its own right, which has discernible themes and connects these in fruitful ways, and which at the same time serves these deeper aims of learning in the future, of understanding physics, of understanding how physics works, of learning to inquire oneself, and of seeing applied and social implications. The success of the course will be judged, at least by its authors, by its success in achieving these aims, although we would also include one other – that of arousing interest and enjoyment in the majority, and not just the able minority, of those who study it.”

He discusses much of this work in an article in Educational Designer:

* A-level is the school leaving examination in England, based on study in the final two years of high school, ages 16-18.